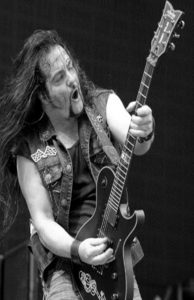 To see Tommy Bolan play is like seeing 10 thousand volts of electricity right in front of you. With over-the-top playing and riveting live performances, he is described as “One of the Most Insane Shredders of All Time”. As lead singer and guitarist for NYC, Tommy plays slammin’, shreddin’, heavy groove-laden rock layered with fierce vocals. Tommy, who was born in Queens, New York,is best known for his Gold and Platinum selling work with the critically acclaimed metal band WARLOCK. Catch Tommy Bolan on tour with his band NYC(new cd in the works)and in “Metal Primer” his instructional DVD,

Tommy was also recently the Lead Guitarist for Richie Ramone (Ramones). He just Recorded,Co-wrote on and Played All the Guitars on the new CD called, “Entitled”(DC-Jam Records). It was mixed by Mark Needham (Pink, Killers) and mastered by Stephen Marcussen (Stones, Prince). He also recently toured South America and Australia with Richie, including playing at “Stonefest 2013”, a show at ANZ Stadium in Australia where he shared the Mainstage with Aerosmith and Van Halen among others.