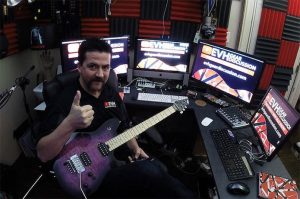 “I have been playing guitar for what seems like an eternity, and actually, it kind of is. I started on the instrument as a teenager, and once I heard Van Halen for the very first time, my life was changed from that moment on.

“After many years of professional touring and recording, I recently found my new musical love, that still allows me to be deeply rooted in the music scene. In January of 2016 I founded “EVH Gear Discussion” now re-branded as “Music Gear Network”, a series of YouTube guitar & music related talkshows. Covering 3 independent shows on the channel, I feature interviews with some of the world’s leading musicians, including some such as Jason Becker, Steve Stevens, Paul Gilbert, Billy Sheehan, Mike Portnoy, Alex Skolnick, Mark Tremonti,  Joel Hoekstra, Nita Strauss, Rudy Sarzo and many more.

“I discovered ideaBench in late 2016 thanks to great longtime friend Jody Page of PedalSnake and feel like an honest member of the ideaBench family.

“My Fastback board literally inspires me to play, and when I do, I not only have the coolest looking board, I also have the quietest thanks to working with 2 other great teams in conjunction with IdeaBench, that being PedalSnake & Strymon. The three, making a Trifecta in the Ultimate Pedal Management!

Thank you Rick & Joanna! Proud to be part of the family!” 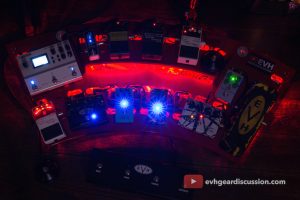